Microsoft’s Path Guide is an unconventional approach to indoor navigation 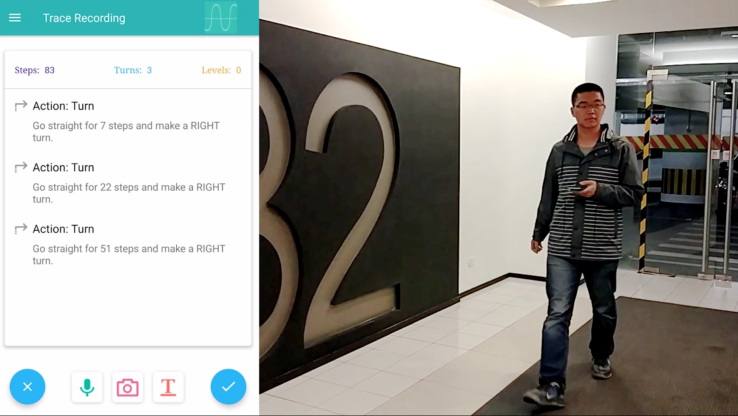 Indoor mapping is one of those stubborn problems that seems to only have solutions that involve a great deal of money and infrastructure: beacons, lasers, emitters, scanners… who wants to install those in malls and office complexes across the world? Microsoft Research has produced an indoor navigation app that keeps things simple, utilizing existing sensors and the fact that people already go most of the places you want to go.

Path Guide is an app currently available only on Android that focuses on the navigation part of indoor mapping. It makes no attempt to visualize the entire volume in which the user is traveling, but trusts other users to create “traces” to and from static locations.

It uses the sensors already in the phone, from accelerometers (to count steps) to magnetometers (to sense the general area where one is starting). No need for GPS, wireless beacons or anything like that.

For example, one trace might take you from the front entrance of the office building to a certain meeting room on the 12th floor. Someone would open the app while in the lobby, start the trace then walk normally to the room. The next person would follow that trace, which has been processed and rendered into basic navigational happy wheels demo stages: “in 20 steps, take a right,” that sort of thing.

The trace creator can augment the path with notes, images and voice recordings in case there are PINs, secret doors or spoken passwords. Traces can be capsulized and sent in emails as well, for people who don’t have the app. It’s not quite augmented reality, but I’m using that tag anyway.

Naturally this will be helpful for people trying to find the Orange Julius at an unfamiliar mall, but the benefit is more tangible for people with impaired vision. Directions at this granularity are hard to come by and this would be hugely helpful for a blind person navigating a location they’ve never been. Same for getting around when you don’t speak the language.

The project has been in the works for nearly two years, led by Yuanchao Shu, Börje Karlsson, Yiyong Lin and Thomas Moscibroda. It’s still a prototype, and even Microsoft’s own post says it “admittedly still has rough edges,” but maybe you can help with that — feedback is appreciated.